We use cookies to make your experience better. To comply with the new e-Privacy directive, we need to ask for your consent to set the cookies. Learn more.

Which Type of Pull Up Grips Are Best for Your Workouts

Pull-ups are one of the best upper body exercises out there. No matter how you choose to do them, or even what you're using them for really; you can't go wrong. They build strength, stability, and way more muscles than most people know about.

Believe it or not, however, pull-ups aren't as black and white as you might think. There are tonnes of different twists you can add to the exercise to make it easier, harder, heavier, lighter, or just about anything else. You can hit everything from your lats and biceps to your pecs and shoulders, it's all down to technique and variation.

Let's look at some of the best

The standard pull up is pretty much what it says on the tin. It's a hardcore upper and mid-back builder, focussing mostly on your lats and your traps but makes sure you're hitting everything as long as your chin reaches that bar.

The pull-up is used across the world as a way of testing overall physical strength and fitness including in many militaries and is a tried and trusted exercise for an increase in strength and size. The biceps do play a role in the exercise; however, they are still dominated by the back muscles.

(Here's the best way to do it)

The wide grip pull up makes things harder still. It takes your pectoral muscles out of the equation completely. The result? Your back is doing pretty much 100% of the work. Whether that's a good or bad thing, you can decide for yourself. (You'll definitely feel the burn on this one).

To do a wide grip pull up, make sure you're putting your hands in a wider grip than your shoulders. Don't go too far, to prevent injury, but make sure the gap is wide enough to make the difference. Other than that; pull like your life depends on it.

The close-grip pull-up is quite the opposite of the wide grip, not only in name but also in the muscles that are needed to make it happen. That makes it a great way to make a pull up specific workout, as well as make sure that you're getting everything that you possibly can out of it, and finding which variant is the best fit for what you need it to do.

The close grip incorporates the biceps more than any other variation (aside from the reverse close-grip pull-up, or chin up as it is commonly known below), and makes the biceps the focus overall. This also allows the pecs to play a more significant role in the exercise than they have done in any other variation, making it slightly easier providing your arms are strong enough.

This can advance slightly further into a one-handed or supported one-handed pull-up, although this is unstable in many cases and could cause an injury. Make sure you're careful. 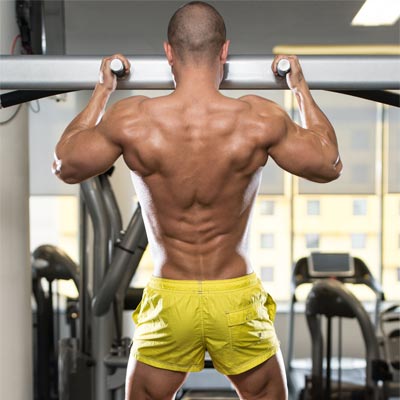 Neutral pull-ups change the mechanic of the exercise quite dramatically. Rather than moving the hand positions along the bar as the other variations do, this utilises bars coming off of the main bar resulting in a sideways type grip as seen in exercises like the hammer curl. That's awesome for hitting muscles harder in different angles.

Doing a neutral grip pull up has other pros and cons too. The movement style is a lot more free than it is in other grips, and that means it's a great way to minimise injury risk (perfect if you're new to pull-ups). The bad thing is, it's not as heavy a back hitter.

The chin up is probably the most friendly pull up exercise variant, and that's because it's the least similar. The reversed grip changes the game completely and means that your biceps are doing pretty much everything. They're a lot like the neutral grip, but with that added emphasis you probably didn't know you were missing out in your arm workout.

To do a chin up, you need to have your palms facing you, and then treat the rest fo the exercise exactly as you would any other pull up. Squeeze your arms until you're at the top of the lift. (It's actually one of the best bicep exercises out there, even better than curls).

If you love the pull up exercise as much as we do, but you're just not sure which way to go about it, this might be the one for you. Doing all of them is the best thing you can do for your progress, but if you're short on time, this is a quick answer.

Put one hand in a standard grip, and one in reverse. That's all there is to it. It hits a range of different muscles and does just what you need it to. All we ask is you make sure you swap and work evenly. you do not want imbalances.

Muscle-ups take pull ups to the most extreme they can be. They're fiendishly difficult, but as far as upper body exercises go, they're probably the best there is. They don't even use weights and they're still a near-impossible feat for most of us.

The technique is exactly the same as a pull up, but when you reach the peak of the movement, you have to then push yourself up using your chest and triceps until your arms are fully extended. Only when you've done all of that have you done a full rep. Nightmare, right?

If you take one thing away from this, it's this. Pull-ups are absolutely awesome, no matter what grip, style or set you want to do. They're one of the best exercises in existence. There's no disputing it.

Go careful, mix it up, and make the most of them!

Exercises You Can Do With Tri-Grip Weight Plates

How To Bicep Curl

Exercise tips and advice along with a wide range of offers and discounts tailored for your exercise journey.