Battle of the Bicep Builders: Curls vs Chin Ups

When it comes to bicep exercises, we already know that we're spoilt for choice. Two of the very best ever we already know to be the bicep curl vs the chin up in particular. That in itself, however, only brings a new question to light, and that's which is the better exercise? Looking at bicep curls vs chin ups even closer still,  they're amazing bicep building exercises. We're to first to happily accept that, but there's always space for a winner.

The biceps aren’t always a straight forward muscle to train. They're great to train on their own, but they're used for a load of there things too. Your back, for example, needs them in almost every exercise, but so do all upper body exercises. It's tough to know what's best for them, and it's vital that you do. that's why this is so important.

The bicep curl is possibly the most iconic exercise there is. It's a good reliable method to get stronger arms and gives reasonable progress for that extra bump on your arms. It has a lot of variables too to make sure that it is effective at what it does, but even the classic alone has proven results. It's a solid exercise for solid arms.

One of the biggest benefits here is the isolation the bicep curl offers you. The pivot of the elbow and full potential for extension means that you hit both heads of the biceps and nothing else. The only real issues with this benefit lie in your technique.

If you start to use a weight that is too heavy for what you are capable of, you’ll likely find issues with other areas of your body, and the progress you should be seeing. If you begin to sway from the exercise or move your elbows to build momentum, you’re going to be bringing other muscles into the equation to lift the bar. This is where the problems occur.

Another great thing about bicep curls is that, once you do manage to get the isolation nailed, you know exactly how you are performing. Other exercises like the chin up don't quite offer this detail. You know exactly how much you can lift and that it's only your biceps seeing the progress rather than not being able to understand where your weaknesses in the exercise are coming from. 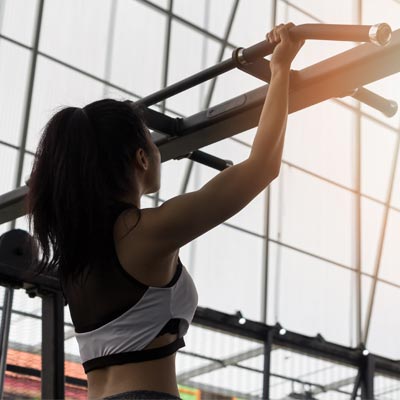 Rather than being an isolated exercise like the curl, the chin up is a compound exercise which also trains a lot of your upper back. This means that it’s a more efficient upper body exercise, as well as helping you to build strength more effectively too. Even if you can't quite manage a chin-up straight away, you can add resistance bands to make things a little easier for you and build up to it unassisted. Your upper body will thank you for it.

The pull up gives you much more functional strength because of the type of movement that it is. Its skills are transferable to real life performance such as climbing things as well as giving a generally stronger upper body. It also improves your grip strength quite dramatically more than the curl would be able to, so it has that going for it as well.

Despite the isolation of the bicep curl vs the chin up, chin ups are actually the better exercise for your arms and your upper body as a whole. The practicality of the functional strength is a big factor, but not as big as the facts.

Chin-ups are proven to have a greater bicep activation than curls. That's all there is to it. It also means that you can add excess weight if you begin to find the exercise too easy; your progression is not capped either.

The bicep curl is still a formidable exercise never the less, and the two together will give you significant results if you stick at it. Just remember to train your arms with your back or give a good couple of days in between training if not to make sure that you’re allowing yourself time to recover.

How to start a personal training business

The Benefits of Indoor Cycles on Injury Rehabilitation

5% off your next order