​5 of the Best Quad Exercises

Your quads are often used as the driving force or the stabilisers in the vast majority of leg exercises, but they don’t always get the recognition they deserve. As the name suggests, the quadriceps are made up of four large muscles. They all do a lot of work for general leg movements too. It’s important to make sure they are strong enough to support your various workouts and requirements inside and outside of the gym as well.

They’re also often sought after because of their physical appearance. They can be an impressive size after all. So how can you get the best results from them? Look no further than these 5 quad exercises the next time it's leg day.

The Bulgarian split squat is one of the more difficult but undoubtedly effective quad exercises for the effort that it takes. It may be a little awkward at times due to having to train one leg at a time rather than both like most other leg exercises. This doesn't have to be a bad thing in the long run as it can be amazingly helpful in keeping focused and really putting in as much effort as you possibly can do into each leg. It's good for the mind-muscle connection too.

The basis is typical of the standard squat, but with one foot resting behind you and elevated to ensure the other is bearing the workload unaided. Just make sure to keep balanced properly to help in your core and stability development. As well as making serious progress on your quads, of course.

Next up on the list for quad exercises is the narrow stance leg press. The leg press on its own is more than capable of hitting the quads effectively, but the narrow stance adds the variation to the exercise. This is essential for optimising growth and targets the quads to reach a greater muscle activation than the standard leg press could, for less of the weight that would be needed. That's a recipe for success.

This is essential to be carried out with other exercises as well though because of this. Make sure you don’t rely on it too much. The seated positioning of the exercise is also unfavourable to some people, so find out what works for you. Different exercises are better for different people for a huge number of reasons. 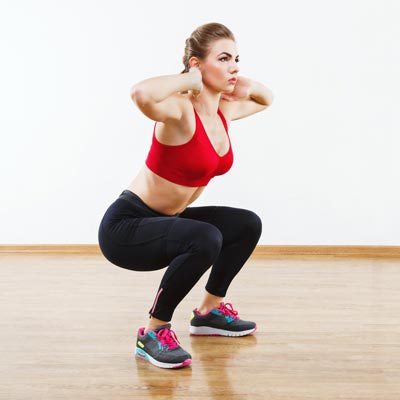 At Exercise.co.uk, we do love the squat. There are few exercises on the planet that can hit that many muscles at once in such a true feat of strength. It is the pinnacle of leg training by anyone's definition and should be treated as such, and the quads are absolutely no exception to this, as long as you get your form right.

The back squat is the most common type you'll see.  It's great for all of the leg muscles. The front squat, however, takes the game up to another level, especially as a quad focussed exercise. With the weight being in front of the body rather than the back, it means that the quads have to be incorporated at an entirely new level. that means you have to support the weight from a different angle. Put those together and it's incredible overall for this list.

These may appear to be more of a high-intensity exercise rather than a strength exercise, but they are still amazing effective at building the quads. The technique is not too common in the gym so it can be hard to know if you're doing it right.

The premise is to get into a low crouching position and bring one leg down to a kneel, before doing the same with the other. Once there, come back up to the starting position again one leg at a time, before repeating in the opposite direction creating an alternating pattern. The lower you go, the more activated your quads become. Do be careful of your knees though. A mat is always a good call.

Lunges are our lat exercise and are famous for being great quad exercise. They are a common stretch as well as common exercise because of this, so why not use them with weights to get peak activation from your quads. Do watch your form again though!

The best way to go about this is likely to be with a kettlebell. Two kettlebells specifically, one in each hand and performing the exercise stepping backwards instead of forwards to get the lowest impact on your knees. this ensures you're keeping as safe as you can whilst still getting great results.

It's important to make sure you're being safe throughout all of your exercises and working the rest of your legs too. that's the only way to make sure that your strength is functional, and that you can support yourself during other exercises too. Generally speaking, you are only as strong as your weakest stabilising muscle when it comes to exercising safely, but quads are always good to utilise.

How to start a personal training business

The Benefits of Indoor Cycles on Injury Rehabilitation

5% off your next order